When Tina and Pete started making liver biscuits at home in 2010 to help train their dog during obedience classes, little did they know that in seven years' time they would be making the biscuits, and many other doggie treats, on a commercial basis in Cornwall!

The treats proved to be so popular at the obedience class that other dog owners started asking if they could buy the liver biscuits for their own dogs.  Some further research with other dog owners showed that there was a definite need for good quality doggie treats, and after some trials the idea for Paws for Cake was born.

Pete comments, 'Having rolled dough out by hand over the last six years, and becoming increasingly busier, it was all becoming too much for our elbows and wrists!  The new MONO Dough sheeter makes things so much easier now, so much so that we have had to squeeze in two more ovens to cope with the demand!'

Tina adds, 'It's a big step for our little business to invest in this piece of equipment, but the help we had from MONO was brilliant!  The new sheeter is definitely going to play a big part in growing our business even further.'

MONO's Christian Trubey, who is responsible for recommending the MONO Sheeter to Paws for Cake, says 'I am so pleased that Pete and Tina have taken so well to their new sheeter.  From day one, they have been an absolute delight to work with and it is great to see the positive impact just one machine can have on the productivity and profitability of a business.  I'm positive that the MONO sheeter will truly help Paws for Cake in the next phase of its expansion and I wish them the very best of success for the future!' 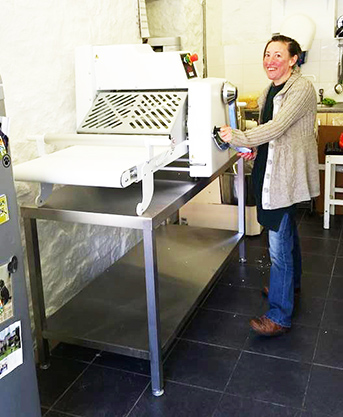