The '50s: A Decade of Post-War Innovation

The '50s: A decade of post-war innovation

The international success of the Universal Dough Moulding Machine, commercially launched in 1946, inspired Ayres Jones to invent and design a whole range of moulders, dough greasers, bread slicers and wrapping machines which were launched at the very first post-war International Bakery Exhibition at Olympia, London, in 1951.

By the early-mid 1950s the major baking groups were rapidly buying out all the smaller and medium sized bakeries and it was generally assumed trend signalled the demise of the small independent baker and that their disappearance off our high streets was inevitable.

Ayres naturally had a different idea, however, and decided to concentrate his efforts on helping the small baker become more efficient and productive; he decided to design a range of innovative bakery equipment which would help streamline the whole bread production process, enabling the small baker to be able to compete more favourably with the major players in the market. 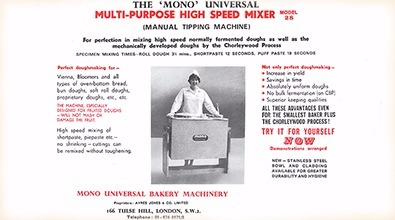 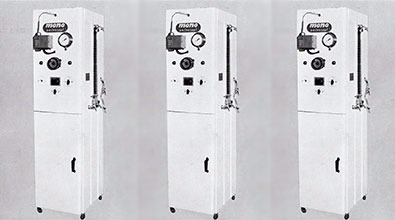 This single-mindedness resulted in the 1958 launch of MONO Universal's first bread plant, the Sleeping Baker, which completely automated the dividing, intermediate proving and moulding processes.  This ingenious automation, meant that the lack of available staff was no longer a barrier to producing high quality bread at an affordable price.

The Sleeping Baker was eagerly adopted by many small bakers who immediately recognised the huge labour saving nature of the new bread plant and how it could revolutionise their efficiencies and improve their profit margins. Needless to say, the popularity of the Sleeping Baker went from strength to strength and was a huge success!