Home >  About Us > Our Heritage > The '60s: A Decade of Unbridled Creativity

The '60s: A Decade of Unbridled Creativity

The 60s: a decade of unbridled creativity

The 1960's was, undoubtedly, a decade like no other; bursting with a vibrancy, creativity and a sense of freedom which encouraged experimentation and personal expression in almost all areas of design, the arts, music, cinema, fashion and business which naturally challenged society's norms.  It was also the decade in which the first package holidays to Europe made overseas travel affordable to all; exposing the British taste buds to a whole new world of different flavours and textures.

His ingenuity and passion for invention resulted in the creation of MONO Equipment's first ever Confectionery Depositor, a machine which has been emulated across the globe ever since.

As you would expect, Ayres continued to improve on this original design culminating in  the launch in 1969 of the MK 5 confectionery depositor featured opposite.  Soon after, in the early 1970's the first single phase depositor, the MK 9, was launched which featured even more advanced features 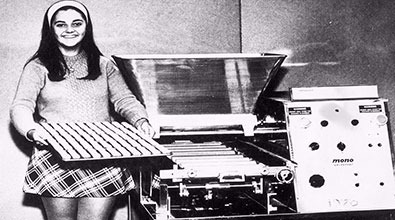 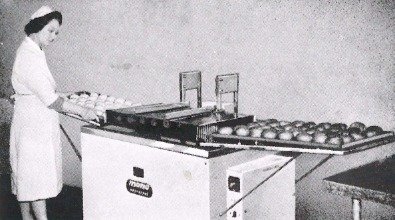 This inspired doughnut fryer enabled a single person to fry up to '1,000 perfect doughnuts every hour ' with consistent results using a pre-set, thermostatically controlled oil temperature and pre-determined frying time.  The Automatic Doughnut Cooker also automatically lowered the doughnuts into the frying oil and the raised them at the end of the frying time.

The Automatic Doughnut Cooker promised, and delivered, consistency in appearance, volume and texture through its controlled time and temperature.  Many more iterations of this original  fryer were also to follow.