Home >  About Us > Our Heritage > The '40s: It All Started with Bicycle Parts

It All Began with a Handful of Bicycle Parts

The '40s: it all started with A handful of bicycle parts

During the Second World War, MONO Equipment's founder and President, Mr D Ayres Jones, was working at the family's bakery in Swansea, South Wales. When his brother was conscripted for war service, and facing acute labour problems, Ayres found it increasingly difficult to manage the increased workload on his own and began contemplating the design of a machine which would mechanically assume the laborious task of moulding the dough before baking. 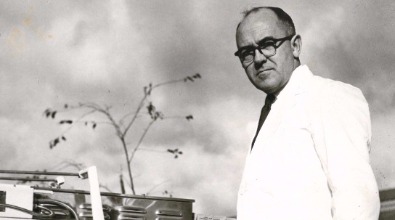 His dogged determination, combined with his love of engineering, meant that within a short period of time Ayres had designed and built his first bread moulder almost entirely from scrap materials, including parts from an old motor cycle and bits and pieces sourced from a local scrapyard. The parts he couldn't source, he made himself using a small lathe which he had taught himself to use.

In the time-honoured fashion of the day, there was no welding involved in the machine's build as each part was riveted together piece by piece.  This post-war 'make-do-and-mend' philosophy helped fire the imagination and creativity of designers and inventors who had to be truly innovative with the limited materials they had available.

The bread moulder was so successful that other bakers in the principality heard of this wonderful new time-saving machine and approached Ayres to make a moulder to help production in their bakeries too.  As a result of the genuine interest expressed by local bakers, and those further afield, in 1946 the MONO Universal Bread Moulding Machine went in to commercial production.

The MONO Universal Bread Moulding Machine proved to be the catalyst which propelled Ayres in to a career of designing a whole range of bakery equipment.  Indeed, the fact that Ayres had spent the majority of his working life in the bakery, put him in the ideal position when it came to designing new bakery equipment, as he knew at first hand the problems and challenges experienced by the small baker and sought to remedy the problems through mechanisation. 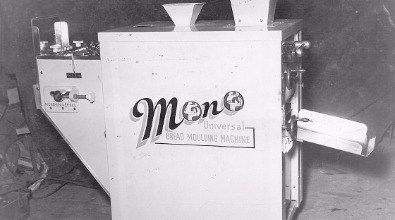 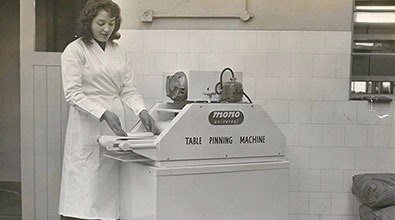 This great knowledge and experience provided Ayres with a practical insight which was invaluable when approaching the design of a new piece of machinery.  Indeed, the speed of new product development over the next few decades is testament to his knowledge, his drive and his ingenious creativity.

By 1978, over 12,000 Universal Bread Moulders had been manufactured and sold to almost every corner of the globe. Today MONO Equipment manufacturers a range of bread moulders, but the basic principles of their design have hardly changed since the very first MONO Universal Bread Moulding Machine designed by the great visionary innovator, D Ayres Jones.